Anglicanism is a Protestant tradition within Christianity founded in England and present in many other countries. It comprises a loose coalition of several denominations, including the Church of England and the American Episcopal Church. Anglicanism's central figurehead is the Archbishop of Canterbury. Anglicanism's influence is broad because of its spread during the colonial expansion of the British Empire.

A commonly used book in the Anglican church is the Book of Common Prayer. There is currently tensions between various Anglican denominations over women priests and acceptance of homosexuality, to the point that a schism is a possibility. [1]

Within the movement, a member of the clergy is known as a minister. [2] Marriage of clergy members is widely practiced. Women priests are allowed by most Anglican churches. 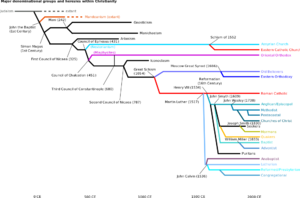 The supreme governor of the church is the Queen of England. Since the Queen is also the head of state, state and religion is not technically separated in the UK. Resistance to change of this state of affairs is called antidisestablishmentarianism, which is incidentally one of the longest words in the English language.

The Church of England is also know for its diversity and tolerance, making it one of the least demanding denominations in Christianity. The comedian Eddie Izzard satirised this position (or rather the judgmentalism of the other denominations) in his "Cake or Death?" routine. [3]

There is a minority of atheist clergy in the church: about 2% of ministers think that God is a human construct. [4]