For more information, see the Wikipedia article:
Argument from degree 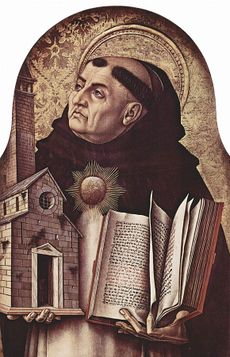 The argument from degree is based the comparison of objects allegedly requiring extreme examples as a basis for a comparison.

As formulated by Thomas Aquinas, the argument, also known as Aquinas' fourth way, is stated as follows:

"We notice that things in the world differ. There are degrees of, say, goodness or perfection. But we judge these degrees only by comparison with a maximum. Humans can be both good and bad, so the maximum goodness cannot rest in us. Therefore there must be some other maximum to set the standard for perfection, and we call that maximum God."

"if these degrees of perfection pertain to being and being is caused in finite creatures, then there must exist a "best," a source and real standard of all the perfections that we recognize belong to us as beings. This absolutely perfect being—the "Being of all beings," "the Perfection of all perfections"—is God."

"That's an argument? You might as well say, people vary in smelliness but we can make the comparison only by reference to a perfect maximum of conceivable smelliness. Therefore there must exist a pre-eminently peerless stinker, and we call him God. Or substitute any dimension of comparison you like, and derive an equally fatuous conclusion."

The concepts of "more" and "less" are not based on comparing things to extreme cases. By saying, "as fire, which is the maximum heat", Aquinas scuttles his own argument: fusion reactions, which power stars (including the sun) are much hotter than fire. Aquinas, of course, did not know this, and therefore could not have based his idea of heat on the "maximum heat". Heat is defined in terms of energy and movement of atoms. Even though there is no known upper limit to heat, this does not make heat a meaningless concept.

There is no guarantee that a maximum is even logically possible, as in the cases of length or magnitude. We can tell which of two objects is longer or bigger, not by comparing to the maximum length (which would be infinite), but in the mathematical way of seeing which has leftover length when the one is taken from the other. When we compare, we are not seeing which is closer to an extreme, but rather which is in excess of the other: we take one as standard, and see if the other is above or below that standard.

Likewise, we can know what "goodness" and "perfection" (in Aquinas's sense) mean by comparing people and actions to each other subjectively, and not to some superlative standard of goodness and perfection.

No concrete examples of perfection exist[edit]

An abstract standard of perfection can be useful without having concrete existence. For instance, we can mathematically define a perfect circle and use that as the standard for roundness. However, it is impossible to draw a perfect circle, and thus a perfect circle cannot exist. Similarly, the fact that we can imagine a perfectly good being in no way implies that that being actually exists.

Furthermore, the "and this we call God" part might as well say, "and this we call Bob." The argument is creating a definition of a "maximally good" thing, and then giving it a name Thomas Aquinas likes. However, a "maximally good" being is not what most people call "God", so the conclusion is not proof of a god, it's merely a biased choice of a name given to a particular definition of a thing for which no evidence is given that it even exists. It's basically an attempt to define God into existence by an argument from ignorance and proof by logic.

Also, there's no reason the argument can't be applied with evil instead of (arbitrarily) good: "there is evil in the world, and the fact that we can perceive different standards of evil means there must be some maximal exponent of evil, and we call this supreme evil God."

Finally, even if we ignore all of the other flaws of the argument, it doesn't tell us which god is the real one. (Though, if the definition in the argument is strictly followed, it does allow us to rule out any gods that are not maximally good, such as those that would drown out nearly everyone on the planet.)