Argument from the attributes of God 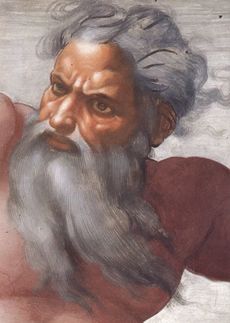 The Christian God, as depicted by Michelangelo.

For more information, see the Crash Course video:
What Is God Like?

David Hume pointed out the related problem that it is difficult to demonstrate the existence of God without any other observation of objects with similar attributes.

The argument can be restated:

"One of what I think is the best arguments against the existence of a god is that we have no evidence whatsoever that any kind of consciousness can exist apart from a physical brain.[1]"

"For there is not a shred of solid scientific evidence for such disembodied intelligence. All well-attested examples of intelligent behavior rely on a complex physical structure: a brain or perhaps in future, a computer. Moreover, all well-attested examples of perception and mental causation rely on physical intermediaries: light rays, signals travelling down nerves, that sort of thing.[2]"

Based on the non-observation of objects that have perfection and unchangeability, Friedrich Nietzsche argued the properties of everything metaphysical imply its nonexistence (which would include the Abrahamic God):[3]

First proposition. The reasons for which "this" world has been characterized as "apparent" are the very reasons which indicate its reality; any other kind of reality is absolutely indemonstrable.
Second proposition. The criteria which have been bestowed on the "true being" of things are the criteria of not-being, of naught, the "true world" has been constructed out of contradiction to the actual world: indeed an apparent world, insofar as it is merely a moral-optical illusion.

He refers to metaphysics as the "true world" and the observable world as the "actual world". In this argument, Nietzsche's thinking draws on earlier ideas of Heraclitus and the non-existence of permanent objects.

"I would argue that the things we can conceive of as perfection (any that I've been able to think of) could not exist in reality. There is something about our imperfect reality, our messy, dynamic, not particularly defined reality, that precludes perfection.[4]"

Main Article: How can finite phenomena prove an infinite God?

God cannot be infinite since we have no evidence that infinite things actually exist. This applies to both potentially and actually infinite things. Apologists often have contradictory views on infinity:

"[...]an infinite number of finite things—whether we’re talking about days, books, bangs, or universes—is an actual impossibility. There can’t be an unlimited number of limited universes. [...later on...] Only the heavens scream out infinity.[5]"

Actually, the universe appears large but finite. On the other hand, infinities of real objects are not directly observable!

"A mere possible compatibility is not sufficient. You must prove these pure, unmixed, and uncontrollable attributes from the present mixed and confused phenomena, and from these alone. A hopeful undertaking! Were the phenomena ever so pure and unmixed, yet being finite, they would be insufficient for that purpose. How much more, where they are also so jarring and discordant! [6]"

For more information, see the Wikipedia article:
God and eternity

"The traditional view has been that God is timeless in the sense of being outside time altogether; that is, he exists but does not exist at any point in time and he does not experience temporal succession.[7]"

"Scripture reveals that God lives outside the bounds of time as we know it (Isaiah 57:15

We have no examples of things existing outside of time. But with inductive reasoning, we can say such a thing probably does not exist.

God is said to have various attributes. These attributes are contradictory. We do not observe attributes with contradictory attributes (e.g. an unmarried bachelor). By induction, objects like God do not exist. This position is similar to ignosticism, which considers statements about God to be ill-defined or meaningless.

Skeptics must be careful not to commit the black swan fallacy, which is to ignore evidence that objects with these attributes do exist.

Being an inductive argument, it is always open to new evidence and not entirely conclusive.