From Religions Wiki
(Redirected from Avoidance of Hell)
Jump to: navigation, search 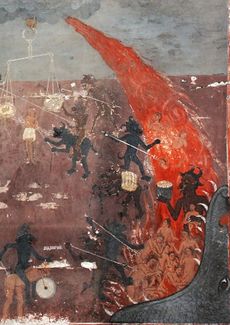 The avoidance of hell is a commonly cited reason for believing in God. This is an example of religion trying to control people through fear.

A similar apologetic tactic is to ask "What would you say to God?" after you died.

Hell is a horrific place where souls are tortured for all eternity. Obviously, no one would want to be consigned there when they die. If you don't believe in (our conception of) God, you will go to hell. So you better believe in God (accept Jesus as your personal savior, join our church, etc.).

"On the day of judgement the conscience of the disbeliever will be his or her own damning evidence. [1]"

In some areas of the United States, fundamentalist churches arrange an alternative to the Halloween "haunted house": a Christian "hell house" in which scenes of a person dying, being judged by God and going to either Heaven or Hell are re-enacted. [2] These productions are intended to strengthen faith and convince undecided people to commit more fully.

The threat of eternal damnation and torment is an ever-popular argument of fundamentalists and presuppositionalists. It is simply an argumentum ad baculum (argument from force), even though the person making the argument does not claim to be the one to carry it out.

Obviously, the threat of hellfire is most effective against those who already believe in heaven and hell, such as theists who are angry with God. Its common use against nonbelievers is puzzling, because to threaten someone with something that they don't believe in is utterly ineffective.

The simple threat of hell differs from Pascal's Wager in several key respects: