From Religions Wiki
(Redirected from Catholic)
Jump to: navigation, search

The Catholic Church is the largest denomination of Christianity.

It comprises the Roman Catholic Church, which follows the western rites or traditions, and the Eastern Catholic Churches, which follow eastern rites. Its head is the Pope, who is based in the Vatican, a city state within Rome. The church has a long history and its position has evolved on many issues over the centuries.

The Catholic Church is lead by the Pope who resides in the Vatican, a city state inside Rome. St Peter's Basilica is the church building most associated with the Pope, although it is not a cathedral. 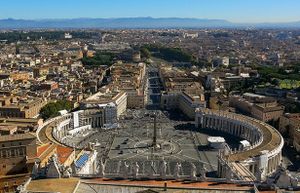 View from behind St Peter's Basilica to the square in front of the church. Tens of thousands often gather to hear the Pope speak.

The Catholic church has been criticised on a wide variety of topics:

"Look at most Catholic countries until the 1960s and beyond, in South America or Ireland or Spain: the picture of the social, political and economic effects of Catholicism is in its essentials the same. Women enslaved to child-bearing, over-large families perpetuating ignorance and poverty, backward social policies and the iron grip of a clergy acting like the Stasi in controlling the minutiae of private lives through the confessional and the influence of fear - fear of hell, among other things."