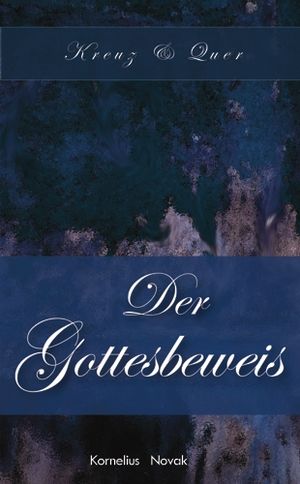 "Der Gottesbeweis" is a 41 page evangelistical pamphlet by Kornelius Novak sold as paperback pocket book. It's primarily sold to Christians as propaganda material. The author attempts to prove the existence of God logically. AFAIK the book's title was "Der logische Gottesbeweis" earlier.

Scriptures: Numerous people including me, Matt Dillahunty and many more (add your name here if you wish) all share the same experience: The more you read the Bible and the better you know it, the more obvious it's blatant contradictions, factual errors, the barbaric and sadistic character and the fallibility of the god described therein become and the more it becomes obvious that the Bible can by no means be divinely inspired.

Power of God: It can't be observed or measured. We only have anecdotal evidence and testimonies which doesn't count.

The author fails to mention that 27 of the 66 books of the Bible are New Testament and didn't even exist in Jesus' times. When Jesus refers to "the Scriptures" he talks about the 39 books of the Old Testament and maybe the Apocrypha, depending on which flavour of Christianity Jesus prefers.

No, they don't. The only acceptable evidence for the Bible would be rock-solid extra-biblical facts like archaeological findings. Circular evidence and bronze age barbarians reinforcing each other's legends don't count.

Fulfilled exactly – says who? Once again: The Bible. See above.

Please note: E-mail-correspondence with the author clarifies, that when he talks about "science" he also includes "spiritual sciences" which we would call "theology".

Looking at the Bible from a theological point of view doesn't count as "scientific examination". The fulfilment of biblical prophecies doesn't stand up to real scientific scrutiny using e.g. archaeological methods.

All prophecy, clairvoyance and oracles are nonsense. None of these have ever been established to be reliable and neither has biblical prophecy.

Argumentum ad verecundiam aka argument from authority – who cares?

Also: The author fails to name this "one of the best scientists" of Stalin presumably not knowing what he's writing about.

Once again: Biblical reports don't count as evidence. You could use the very same argument to affirm the Qur'an, the Bhagavad-Gita and all kinds of "holy books".

It hasn't. It isn't. Here's an analysis of Ezekiel's prophecies about Tyre.

If there were any they would. However: There aren't any.

Jesus' existence, miracles, crucifixion and resurrection are to be doubted. There are literally no reports about Jesus outside scripture (including non-canonical Gospels and other spiritual writings). These books themselves have been written many decades after the actual events. There are no eyewitness reports, no archaeological evidence, Jesus is not mentioned in any contemporary documents. What reason is there to even believe he existed?

Finally a hit! But: Many founders of many cults have prophesised that their religion would spread worldwide. Many sects and cults have disappeared again. Here we have a cult that managed to survive and spread and we immediately talk about fulfilled prophecy. Nice!

Here comes the emotional part of the review:

Persecution? What persecution? Here we have a perfect case of the Munchausen-Syndrome. Those countries persecuting Christians also persecute about anything else. It is just as dangerous to be Hindu or Buddhist in Islamic countries as it is to be Christian. Only our perception is distorted massively because nobody in the western world gives a crap about persecuted Hindus and Buddhists and everyone cries "they persecute Christians".

Oh, I know, that was that other sect. It's "that other sect" when it comes down to accepting responsibility - but it's "us" when we talk about statistics, ja? When suddenly 1/3 of the world population are Christians, ja?

And look at the behaviour of Christian bullies in the USA today. They try to suppress gay marriage by attempting to ammend the constitution, they try to suppress real science in school and replace it with "Intelligent Design", they bomb abortion clinics, again: The list is endless!

First of all the author fails to mention his source. Secondly China persecutes all kinds of political dissidents. If they also happen to be Christians – bad luck. They also censor the internet massively but Anon doesn't complain about persecution, now, does he?

It would have been a real miracle if he didn't. Pascal's Wager all the way - someone call Jeff Dee!

Most of the pamphlet employs the Bible as evidence for the Bible - circular reasoning deluxe! The few extra-biblical pieces of evidence he brings up can be and have been refuted numerous times. The author does not once provide any piece of evidence or sources that can be checked, but still he has the bowels to talk about science.

Book of Opinion, Chapter 1, Verse 1: I don't expect much of a paperback pocket book but this pamphlet is a waste of paper and completely worthless. Good thing he gave it to me for free when he learned that I'm an atheist, bad thing that trees had to die for the paper!