In religious mythology, heaven is a physical or spiritual realm where people may exist after they die, possibly depending on their actions or beliefs. There are significant differences between religions on what is required to reach heaven. There are major differences between different denominations of Christianity on what is required for salvation.

Heaven and Hell are frequently used to reconcile the inability of humanity to mete out justice during corporeal life. The idea is that even if one can get away with violating human laws, a divine witness/victim/judge/jury/executioner will ensure that no one can avoid perfect justice. According to the argument from justice, if we assume justice must be served and only imperfect justice exists in our earthly lives, therefore an afterlife exists.

The risks and rewards of heaven and hell are the basis for Pascal's Wager.

"A moment's reflection should reveal that such pronouncements [on the nature of Heaven] suggest nothing at all about the afterlife and much about the limits of human imagination."

"I cannot see why we should expect an infinite God to do better in another world than he does in this."

"Utopian visions of paradise, including the literal belief in heaven, are always curiously vague."

For more information, see the Wikipedia article:
Heaven in Judaism

Jewish theology considers heaven to consist of a number of layers, some filled with angels, others with perfected copies of things that exist on Earth. Some models described heaven as having seven distinct layers, which was adopted by Christianity and Islamic belief systems.

For more information, see the Skeptic's Annotated Bible article:
When was heaven created? 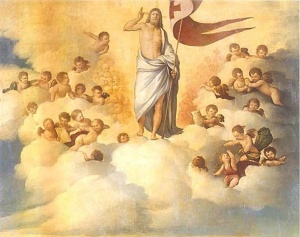 There is little concrete information on what heaven is supposed to be like. The Bible mostly speaks of praising God for eternity.

"Heaven is dynamic. It's bursting with excitement and action. It's the ultimate playground, created purely for our enjoyment, by someone who knows what enjoyment means, because He invented it. It's Disney World, Hawaii, Paris, Rome, and New York all rolled up into one. And it's forever! Heaven truly is the vacation that never ends. [2]"

"Heaven is a place where nothing ever happens. [3]"

Certain sects of Christianity believe that the only requirement to gain salvation and enter heaven is accepting Jesus as your savior, while others believe that keeping the Ten Commandments, doing good works, confessing sins, and/or a number of other requirements must also be met. [4] The Bible is not entirely clear on the issue, or at least requires significant interpretation.

Some Christians also believe that once they die on earth, their bodies will be transformed and they will enter heaven with "glorified bodies". This idea comes from a number of biblical passages including Philippians 3:20-21

"But our citizenship is in heaven. And we eagerly await a Savior from there, the Lord Jesus Christ, who, by the power that enables him to bring everything under his control, will transform our lowly bodies so that they will be like his glorious body"

)…he means: God's people are promised a new type of bodily existence…The rest of the early Christian writings, where they address the subject, are completely in tune with this" [6]. Once they receive their glorified bodies and enter heaven, they will live in harmony with the Lord for eternity [7].

If Heaven exists, Earth is redundant[edit]

If heaven, hell and the Christian God exists, he knows how people would act given the chance and if they deserve heaven or hell even before they exist. The purpose of Earth cannot be to test people since God already knows the outcome. God might as well create heaven and hell and send people straight there. This is particularly true if the dogma of predestination is accepted. Alternatively, God could simply create Heaven and the people who are suitable for that place and simply not create Hell. If heaven exists, there is little purpose in earthly life and God would not bother creating the Earth. However, since Earth does exist, the conclusion is absurd and the premise "heaven exists" is incorrect. Another possibility is that God created people and is simply seeking a pretext to send people to hell, presumably for his amusement.

Apologists counter that the original Earth is needed to either:

However, in each case, God could create beings that have this knowledge or attributes without having them to develop it themselves.

People in heaven cannot do evil. It therefore seems they do not have free will. According to the "free will defence" against the problem of evil, free will is better than not having free will. Therefore, heaven is less than optimal.

For at least some theists, this difficulty is made even more acute by some of their further beliefs: I mean those who envisage a happier or more perfect state of affairs than now exists, whether they look forward to the kingdom of God on earth, or confine their optimism to the expectation of heaven. In either case they are explicitly recognizing the possibility of a state of affairs in which created beings always freely choose the good. If such a state of affairs is coherent enough to be the object of a reasonable hope or faith, it is hard to explain why it does not obtain already. [8]

"If heaven was real, wouldn't it be really boring? I mean, there is no fear of dying, or getting hurt, so no adrenaline. [9]"

"And the way believers from Christianity describe Heaven, it would become torture in a matter of hours.[9]"

"To me it sounds like you're more of a robot in heaven than anything.[9]"

"Do I think I’m going to paradise? Of course not; I wouldn’t go if I was asked. I don’t want to live in some fucking celestial North Korea, for one thing, where all I get to do is praise the Dear Leader from dawn till dusk. I don’t want this; it would be hell for me"

"This answer to such people is that if they cannot understand books written for grown-ups, they should not talk about them."

That is ad hominem. He goes on to say descriptions of heaven should not be taken literally. However, that doesn't mean it won't be boring.

"All the scriptural imagery (harps, crowns, gold, etc) is, of course, a merely symbolical attempt to express the inexpressible."

If something is really inexpressible, perhaps people should not attempt to express it. Another apologetic response to "heaven is boring" is to say our capacity for joy, or whatever heaven provides, will be increased. [10]

Presumably people in heaven will not be troubled by their friends and relatives rotting in hell because they can get God to personally clarify the problem of hell and justify its necessity.

If God gets around to the apocalypse, and only Heaven and Hell exist after that, God would presumably not have any reason not to destroy Satan and any other demons.

Jannah is the Islamic version of Heaven or paradise. People live in the presence of God and are surrounded by luxuries. The Qur'an repeatedly mentions Jannah has gardens. Surah 2:25

People in heaven will have many companions or servants (houris in Arabic). They will be "immortal youths" Surah 56:17-24

According to various hadiths and Islamic theologians, some of these may be married and taken as lovers. Not all Islamic scholars agree with this interpretation, saying houris is an angel. [11][12]

A hadith considered by Islamic scholars to be very reliable mentions 72 wives, being a reward for martyrdom. [13]

"That the Messenger of Allah said: 'There are six things with Allah for the martyr. He is forgiven with the first flow of blood (he suffers), he is shown his place in Paradise, he is protected from punishment in the grave, secured from the greatest terror, the crown of dignity is placed upon his head - and its gems are better than the world and what is in it - he is married to seventy two wives among Al-Huril-'Ayn of Paradise, and he may intercede for seventy of his close relatives.' [14]"

Some extremists claim that 72 virgins is exclusively a reward for martyrdom, but it seems to be a reward for all that reach Jannah. [11] However, this hadith source is considered to be of lesser reliability, it is mostly accepted as valid.

"The smallest reward [each] for the people of Heaven is an abode where there are 80,000 servants and 72 wives, over which stands a dome decorated with pearls, aquamarine and ruby, as wide as the distance from [Damascus] to [Yemen]."

It is unclear if the 72 virgins applies to women who reach Jannah. Some scholars argue that a women has only one husband in Jannah and "will be satisfied with him and will not need any more than that". [15]

If there is an omnipotent and perfectly just God and an everlasting reward, there is no reason to act morally except to secure one's own well-being in the afterlife, i.e. loving your brother can only be a rational means to one's own ends not the well-being of one's brother.