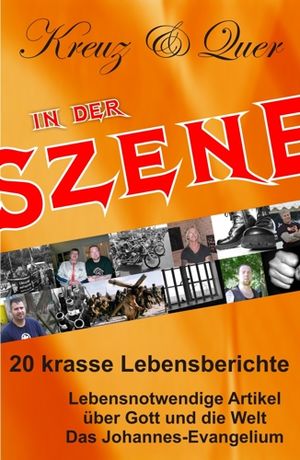 "Kreuz & Quer in der Szene", also referred to as the "Szenebibel", is an evangelistical pamphlet compiled by Kornelius Novak. It has been translated into several languages including Czech, Romanian, Norwegian and Russian. The Szenebibel is sold to Christians and Christian organisations as propaganda material. It has been specifically designed as giveaway to proselytize among all different kinds of people like bikers, prison inmates, drug addicts, prostitutes and others, basically the easiest prey for rampant religious predators. Well, except for them bikers. They're pretty badass.

The first edition was published in 2007 by the Lichtzeichen Verlag GmbH in Lange, Germany. It contained 20 testimonies of people who converted to Christianity in times of severe hardship along with 14 articles by Kornelius Novak propagating his personal flavour of theology. All testimonies were commented on by the author. It also contained the Gospel of John, the translation used was the Schlachter 2000-version (don't read it online here) which is easy to read and understand.

Graphics and layout were done by an amateur and dilettante (I can tell, cos it was me. I apologize. Not for doing it badly, but for doing it at all!). Many images contained in the Szenebibel were downloaded from the internet and used regardless of and ignoring possible copyright issues and the rights of the owners. None of them were ever asked for permission to use their work.

The second edition published in 2010 is somewhat thinner. The Gospel-part has been removed to make production cheaper. As of June 2011 the Szenebibel costs 4.80 Euros, 2 Euros cheaper than the first edition. Some testimonies were removed, new ones were added, some articles were changed. Graphics and layout were still done sloppily and the style still is the same. It still contains many images stolen from the web ignoring the rights of the owners.

(Damn, i threw them all away... I could do articles on them if I still had them. Well, shit happens...)

As of June 2011 the first edition w/o the Gospel-part is available online here:

If someone removes or changes the website, you can still find it here:

The website has been done by a dilettante, too. He still uses frames which you won't see using this link. He didn't even copypasta a script to load the frames. I do apologize for not doing my work properly. No, I'd rather apologize for doing it in the first place. Sorry! Countless people have been trapped by religion after reading it.

I'm not going to link to the Lichtzeichen Verlag GmbH or Norsk Bokforlag AS websites. I don't want to increase their site's value. Google it. It's vile propaganda anyway.