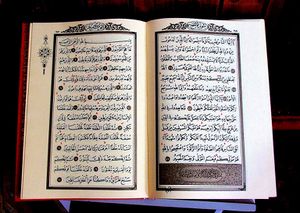 The Qur'an claims it is unique and challenges anyone to produce a Sura (chapter) like it:

"And if ye are in doubt as to what We have revealed from time to time to Our servant, then produce a Sura like thereunto"

. Apologists consider this hard to do because of the complicated grammar of classic Arabic and the inerrancy of the text.

"Ever since the Quran was revealed, fourteen centuries ago, no one has been able to produce a single chapter like the chapters of the Quran in their beauty, eloquence, splendor, wise legislation, true information, true prophecy, and other perfect attributes. [1]"

This is an argument from ignorance and god of the gaps. There may be other explanations but these have not been ruled out.

The argument depends on subjective human judgement. This is not a particularly independent, objective or reliable basis for an argument.

"how do you quantify such a challenge? [...] basically the challenge seems to be a popularity contest, or an opinion poll. [2]"

"If I am the judge, then I will say that these newly composed Quranic verses are better than the age old Quran. If an Islamist is the judge then, of course, these new verses are blasphemy and nothing but gutter works. So, how are we going to come to a decision? [3]"

Since there is no clear standard to meet, it is all to easy for apologists to move to goalposts.

"Depending upon the different opinions of many muslims, the exact meaning of "surah like it" varies greatly. Some say it has to be eloquent and stylish like Quran, some say the verses should match the exact grammatical rules of Quran, some say verses must have to be meaningful, others say verses should not sound like that of soothsayers or pre-islamic poetry etc. There are many other such conditions muslims insist on in order to make the challenge as hard as possible. [4]"

Unstated assumption that the Qur'an is perfect[edit]

This argument only works with the prior assumption that the Qur'an is perfect. The argument is therefore begging the question regarding the special characteristics of the Qur'an.

It is said that the Qur'an was written in flawless classical Arabic. However, classic Arabic is defined as that which is found in the Qur'an, making the argument circular. [5]

Some critics of Islam attempt to meet the challenge directly by producing original texts, such as http://suralikeit.com/

One Thousand and One Nights, which was compiled in Arabic, is more widely recognised by authors as a piece of great literature. [6]

The Qur'an is not that good[edit]

"[The Qur'an] is strikingly lacking in overall structure, frequently obscure and inconsequential in both language and content. [7]"

"From the literary point of view, the Koran has little merit. Declamation, repetition, puerility, a lack of logic and coherence strike the unprepared reader at every turn. It is humiliating to the human intellect to think that this mediocre literature has been the subject of innumerable commentaries, and that millions of men are still wasting time in absorbing it. [8]"

"It is as toilsome reading as I ever undertook, a wearisome, confused jumble, crude, incondite. Nothing but a sense of duty could carry any European through the Koran."

A perfect book would not have required abrogation of earlier verses.

Distinctiveness does not automatically imply a divine origin[edit]

The distinctiveness of the Qur'an does not automatically imply a divine origin.

Books are distinctive in their own way[edit]

The Qur'an is distinctive but so are all other books. Just calling this one special commits the Texas sharpshooter fallacy.