For more information, see the Skeptic's Annotated Bible article:
Where did Moses receive the Ten Commandments? 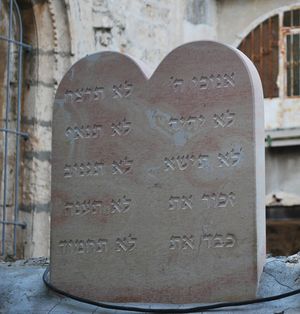 The Ten Commandments originated in Judaism.

According to the Bible, the Ten Commandments are laws given by God (Yahweh) to the Jews via Moses, and are considered to be significant in Judaism and Christianity. Skeptics and scholars generally consider the whole Exodus story to be mythical and there probably were no stone tablets of the Ten Commandments. [1]

The Ten Commandments have three different versions in the Old Testament:

The biblical history of the Ten Commandments begins with a show of smoke, thunder, and lightning as God offers the Israelite a covenant. Follow my rule, he sad, and I'll give you a homeland in Canaan and drive out the present inhabitants. He then announced a set of ten commandments, the content of which appears in Exodus 20:1-17

. This constitutes the traditional and most widely known version of the Ten Commandments.

They appear in virtually the same form in Deuteronomy 5:6-21

, except for two differences (further explained below). An alternative set of ten commandments were written on stone tablets Exodus 34:12-26

Catholics and Protestants use slightly different versions of the Ten Commandments, based partly on different methods of dividing up the verses in Deuteronomy. The Catholic and Lutheran version does not treat as a separate commandment the prohibition against graven images — an obvious problem for the Roman Catholic church which is rife with shrines and statues. To make up for this, Catholics divide verse 21 into two commandments, thus separating the coveting of a wife from the coveting of farm animals. The Protestant versions of the Ten Commandments retain the prohibition against graven images, but it seems to be ignored since statues and other images have proliferated in their churches as well.

sets forth a second version of God's announced commandments. The two sets of commandments are nearly identical; but for two important differences. With regard to remembering the Sabbath, Deuteronomy states that the purpose of the Commandment is to remind Israel that God had liberated the Hebrews from servitude in Egypt. The Exodus version says that the purpose of the Sabbath is to remind Israel that God rested on the seventh day of creation. Another distinction between Exodus and Deuteronomy appears in the last commandment about coveting of other property. Between Exodus 20:17 and Deut. 5:21, Exodus says a neighbor's wife is considered part of the male's household property. In Deuteronomy, she is separate from the household property. Despite thee nearly identical language throughout the two texts, these two differences show disagreement over what was originally supposed to have been inscribed in stone preserved for all to see and hear.

The Bible also disagrees as to when and where the Israelites received the stone tablets. In Exodus, Moses brings the tablets to Israel during the first few months of the Exodus while camped by Mount Sinai. In Deuteronomy, Moses gives them the tablets forty years later, in the vicinity of Mount Horeb at the entraceway to the Promised Land. 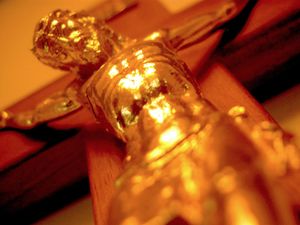 Golden versions of Jesus are sometimes displayed in churches, contrary to Exodus 34:17.

Shortly after Moses returning from Mount Sinai and the whole golden calf incident, Moses smashed the stone tablets on the ground out of fury. After that, Exodus 34:12-26

, God directly told Moses to return on top of Mount Sinai, and God would make an identical (Exodus 34:1

) copy of the original commandments. Moses did as instructed, and returned with the following commandments written on stone tablets:

The difference in content is a Biblical contradiction. [1] This latter version is believed by scholars to predate the traditional Ten Commandments. These above commandments are only time explicitly labelled as "the Ten Commandments" (in Exodus 34:28

), whereas the better known version is not.

The Hebrew or Greek word translated as “commandment” actually means “word.” So, despite the rather verbose content of the Ten Commandments, originally, there should have been just “Ten Words” on the stone tablets.

When God finished announcing the terms of the covenant, the people were frightened and asked Moses to talk with God on a one-to-one basis and leave them out of it "lest we die." Moses then went up on the mountain to talk to God and they had a long conversation and perhaps more than sixty, depending upon how the sentences are punctuated and divided (the full list appears in Exodus 21:1-23:26

) The list has the following preamble: "Now these are the judgments which thou shalt set before them" (Exodus 21:1

In context, Moses's action followed immediately after the private conversation on the mountain and one would expect his writing to contain the substance of that conversation. But, what we have here is an example of complicated biblical editing reflecting the interaction of two or more separate traditions.

Although Jesus referenced the Ten Commandments, they seem to be been superseded in Mark 12:29-31

with the new commandments to "love God" and "love thy neighbour". Therefore, the ten commandments are more relevant to Judaism than Christianity.

"Now men may cavil as much as they like about other parts of the Bible, but I have never met an honest man that found fault with the Ten Commandments.[2]"

No version of the ten commandments says "do not rape", which is a glaring omission from a supposedly perfect law. There is no prohibition against assaulting people, slavery or torture! The commandments do not strictly say "do not lie" because "bearing false witness" only applies in a legal context.

If God wanted people to love thy neighbour, there is no reason that would not be in the ten commandments. Also, the commandments do not explicitly say you must love God! Even an atheist does not have any God before Yahweh, since they believe in no gods at all. 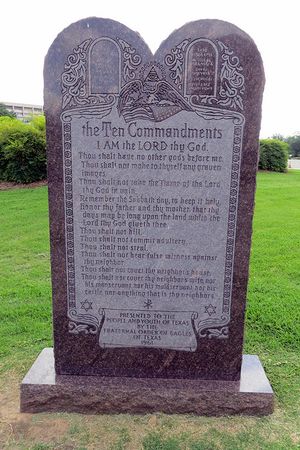 Starting in 1954, the Fraternal Order of Eagles (FOE), with encouragement from movie director Cecil B. DeMille (director of the 1956 movie The Ten Commandments), began producing granite monuments displaying the Ten Commandments. Today, there are 145 such monuments documented in 34 states, plus one in Canada.

A common claim by those who believe that America is a Christian nation is that United States law is somehow based on the Ten Commandments. They point primarily to the laws such as "Thou shalt not kill," "Thou shalt not bear false witness," and "Thou shalt not steal" to claim that these are the basis for modern law.

"We have a federal judge saying we can't recognize who God is, yet that's the basis of our justice system. They have the audacity to come into our court and say we have to remove the foundation of our law, which is the Ten Commandments."

"The Ten Commandments-only two of which are codified into our [United States] legal system-are about lusts and violations that are largely beyond the reach of law."

In fact these sorts of laws have existed in societies throughout history, including societies which significantly predate the Old Testament. The Code of Hammurabi is a good example.

Most of the other commandments have marginal relevance to modern American law, or none at all.

Even if the laws of the United States were based on the Ten Commandments, it would make it a Jewish country! Laws in the Old Testament only have secondary importance to Christians, who supposedly follow the New Testament as their primary scripture. This is an instance of Christian's selective use of the New Testament.

For more information, see the Skeptic's Annotated Bible article:
What was the sixth commandment on Jesus' list of "the commandments?"