The Case for Faith 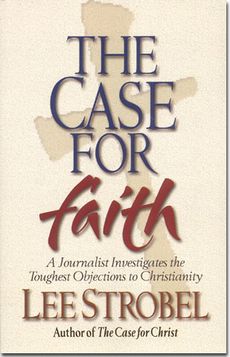 The Case for Faith: A Journalist Investigates the Toughest Objections to Christianity is a popular piece of apologetic literature written by former journalist Lee Strobel.

After interviewing evangelist turned atheist, Charles Templeton, Lee Strobel sets out to explore eight major objections to Christianity which act as stumbling blocks on the path to spirituality. They are:

Strobel poses these objections to eight prominent Christian apologists and lets them make "the case for faith."

Objection #1: Since Evil and Suffering Exist, A Loving God Cannot[edit]

Lee Strobel begins his investigation with the problem of evil. He interviews philosopher Peter John Kreeft who has written several books on the issue. Kreeft compares humans to a bear being sedated, confusing a hunters compassion with harassment and injustice: we must trust God even if we can't understand his methods. This is essentially an argument from ignorance, for he is suggesting we keep a strong faith in spite of blindness to an ultimate purpose.

In a bit of a tangent, Kreeft lays out his definition of faith. He claims that "If we had absolute proof instead of clues, then you could no more deny God than you could deny the sun." While this may be true, it is also irrelevant: If God is most especially interested in worship, why does he need to mask his existence? Figures in Christian tradition such as Lucifer chose not to worship God despite full revelation. Kreeft finally characterizes faith as a deep trust in an analogy where he disregards solid evidence against his wife based on his collective personal experience. He does not explain, however, why this downright irrationality should be considered a good thing.

Professor Kreeft proceeds to turn the tables on the problem of evil with a modified moral argument. Addressing Templeton, he claims "The fact that he's using the standard of good to judge evil means that he has a notion of what ought to be; that this notion corresponds to something real; and that there is, therefore, a reality called the Supreme Good. Well, that's another name for God." Unfortunately for Kreeft, this reasoning can be used to define an a surplus of "supremes" into existence: Since we have a notion of beauty there must be an ultimate beauty. Since we have a notion of taste there must be an ultimate flavor.

Continuing to evade the paradox, Kreeft alludes to evolution:

If there is no Creator and therefore no moment of creation, then everything is the result of evolution. If there was no beginning or first cause, then the universe must have always existed. That means the universe has been evolving for an infinite period of time - and, by now, everything should be perfect. There would have been plenty of time for evolution to have finished and evil to have been vanquished. But there still is evil and suffering and imperfection - and that proves atheist wrong about the universe.

Here Kreeft displays ignorance to science as well as logical fallacies. First, he presents divine creation and blind evolution as "either-or" opposites, a false dichotomy. The absence of a Creator does not automatically prove unguided evolution is responsible for all complex life.

While it's possible that the building blocks of the universe have always existed, astronomers tell us that our present universe began several billion years ago at the big bang. Even supposing things have been "evolving for an infinite period of time," there is no reason to believe evil would disappear, as our universe has a finite origin. And since natural selection only applies to terrestrial life, there's no evidence to assume it ever will factor out galactic imperfection. Kreeft did not come close to meeting the burden of proof that comes with such an extraordinary claim.

About twenty pages into the chapter, Professor Kreeft begins to address the three traits attributed to God in the problem of evil. Kreeft confesses "one of those beliefs about him must be false, or we must not be understanding it in the right way."

Kreeft defines omnipotence as the ability to do "everything that is meaningful, everything that is possible, everything that makes any sense at all." He proceeds to project limits on it, claiming God is incapable of self-contradiction: "The source of evil is not God's power but mankind's freedom. Even an all-powerful God could not have created a world in which people had genuine freedom and yet there was no potentiality for sin, because our freedom includes the possibility of sin within its own meaning."

Even though this section is meant to deal exclusively with the definition of omnipotence, it begs serious questions regarding God's omniscience not addressed in the interview. If God knew man would fall, allowing evil into the world, why did he bother creating such a flawed universe in the first place? There would have to be a benefit, something only humans could provide God. This however, wouldn't make sense with an omnipotent, presumably self-satisfying being.

Another problem with the free will objection to the problem of evil is that it conveniently overlooks natural disasters and other ironically titled "Acts of God" which continuously wreak tragic amounts of suffering without any sin involved.

Additionally, if God is only able to do "everything that makes any sense at all," how is he able to perform miracles?

Moving on to omniscience. Kreeft returns to the sedated bear analogy suggesting "a loving God could deliberately tolerate horrible things like starvation because he foresees that in the long run that more people will be better and happier than if he miraculously intervened." He cites the crucifixion as an example, claiming great good can come out of terrible suffering. Though cleverly disguised, this is essentially another argument from ignorance as we are reduced to watching life pass through the lens of faith, without any justification to trust God or his judgment.

Objection #2: Since Miracles Contradict Science, They Cannot Be True[edit]

Objection #5: It's Offensive to Claim Jesus Is the Only Way to God[edit]

Objection #6: A Loving God Would Never Torture People in Hell[edit]

Objection #7: Church History is Littered With Oppression and Violence[edit]

Objection #8: I Still Have Doubts, So I Can't Be a Christian[edit]