The Dragon In My Garage

For more information, see the Wikipedia article:
Parable of the Invisible Gardener 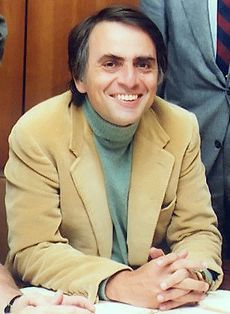 Carl Sagan at the founding of the The Planetary Society

The Dragon In My Garage is an section from The Demon-Haunted World by Carl Sagan which criticises adhoc special pleading for a hypothesis or explanation. The idea is probably based on John Wisdom's earlier idea of an "invisible gardener" and developed by Antony Flew. [1] A person claims to have a dragon in their garage. When asked why this dragon cannot be seen, they explain it is an invisible dragon. Further discussion reveals the dragon to be completely undetectable.

"Now, what's the difference between an invisible, incorporeal, floating dragon who spits heatless fire and no dragon at all? If there's no way to disprove my contention, no conceivable experiment that would count against it, what does it mean to say that my dragon exists?"

We may prefer the "no dragon" explanation because, according to Occam's razor, all things being equal, the simplest solution tends to be the best one.

The concept is similar to Karl Popper's idea of auxiliary hypotheses, which he criticised for being a way to maintain a flawed theory, often by making it effectively unfalsifiable.

"As regards auxiliary hypotheses we propose to lay down the rule that only those are acceptable whose introduction does not diminish the degree of falsifiability or testability of the system in question, but, on the contrary, increases it. [2]"

"Two people return to their long neglected garden and find, among the weeds, that a few of the old plants are surprisingly vigorous. One says to the other, 'It must be that a gardener has been coming and doing something about these weeds.' The other disagrees and an argument ensues. They pitch their tents and set a watch. No gardener is ever seen. The believer wonders if there is an invisible gardener, so they patrol with bloodhounds but the bloodhounds never give a cry. Yet the believer remains unconvinced, and insists that the gardener is invisible, has no scent and gives no sound. The skeptic doesn't agree, and asks how a so-called invisible, intangible, elusive gardener differs from an imaginary gardener, or even no gardener at all."