Thou shalt not kill

For more information, see the Skeptic's Annotated Bible article:
To kill or not to kill. 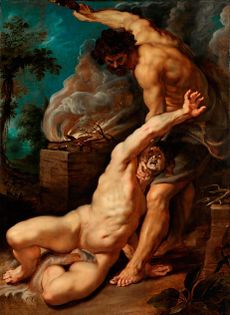 Thou shalt not kill is the 6th of the Ten Commandments in the Protestant tradition. It is considered the 5th commandment according to Catholic numbering.

Some translations read: Thou shall not murder.

Killing is sanctioned elsewhere in the Bible[edit]

The Bible commands death for various sins, such as witchcraft, bestiality and being a unruly child. Apologists claim that the 6th commandment refers specially to murder, to kill without authority. [1] Killing sanctioned by God is not addressed by the 6th commandment.

"It is no good quoting "Thou shalt not kill." There are two Greek words: the ordinary word to kill and the word to murder. And when Christ quotes that commandment He uses the murder one in all three accounts, Matthew, Mark, and Luke. And I am told there is the same distinction in Hebrew. All killing is not murder any more than all sexual intercourse is adultery."