For more information, see the Wikipedia article:
Argument from nonbelief 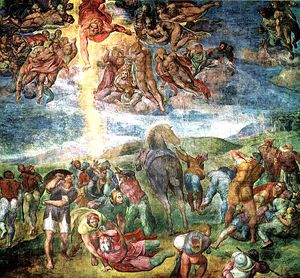 "If God wants us to do a thing he should make his wishes sufficiently clear. Sensible people will wait till he has done this before paying much attention to him."

"God will reveal Himself to a heart that is sincerely seeking Him.[1]"

The argument from non-belief is arguably much stronger than the problem of evil because it deals with concepts, such as relationships, that are well within the understanding of humans.[2] Not only can atheists refer to their own experiences, but we can also check the historical record across cultures to see if God communicates in a way we might expect, if he existed.[3]

[...] if there is a god, that god should know exactly what it would take to change my mind...and that god should be capable of doing whatever it would take. The fact that this hasn't happened can only mean one of two things:
1. No such god exists.
2. Whatever god exists doesn't care to convince me, at this time.
In either case, it's not my problem and there's nothing I can do about it. Meanwhile, all of those believers who think that there is a god who does want me to know that he exists - are clearly, obviously, undeniably... wrong.[4]

"All God has to do is talk to me. If he shows up at my house, I'll definitely make time for him. No problem. He can do it with an apparition, he can send an angel, it doesn't matter. All he's got to do is talk to me himself. I've got questions. If we wants me to believe, there are certain things that need to be answered and I would live to pick his brain on that."

Arguments for the first premise[edit]

J. L. Shellenberg, the original proponent of the argument, has argued that a loving God would want to have a relationship with every person on Earth, which requires that his existence be made evident to everyone.

When it comes to the use of divine hiddenness as an objection or evidence against God, Daniel Howard-Snyder and Paul Moser in the introduction to a volume of papers dedicated to refutations of Schellenberg's argument, cite Nietzsche's question: "a god who is all-knowing and all-powerful and who does not even make sure his creatures understand his intentions — could that be a god of goodness?"

Theodore Drange, who defended the argument in his 1998 book, Nonbelief and Evil: Two Arguments for the Nonexistence of God, explicitly focused most of his book on the god of evangelical Christianity. He approvingly quoted David and Randall Basinger, who said, "[T]he philosophical community would be better served if it concerned itself primarily with... specific theological systems." (emphasis added)[5]

A number of Biblical passages suggest God strongly desires everyone to be aware of his existence:

Drange also cites a number of divine commands which suggest God wants everyone to believe:

), and called that his 'greatest commandment.' (c) Jesus directed missionaries to preach the gospel message to all nations (Matt. 28:19-20

In spite of his emphasis on evangelicalism, Drange has explained that he views his argument as a problem for anyone who would answer "yes" to two questions:

Other supporting verses include:

Though Shellenberg refers to his argument as dealing with "divine hiddenness," he has specifically formulated it in terms of reasonable or inculpable non-belief:

Theodore Drange, in contrast, has argued the argument should be formulated simply in terms of non-belief. First, he argues that the distinction between non-belief and reasonable non-belief is unclear. Also, he argues that even if it could be made clear, it would be irrelevant:

"A perfectly loving deity would set vindictiveness aside and still want to help nonbelievers (by supplying them with evidence of his existence), despite their culpability."

Many counter arguments deny the premise that God wants a relationship or belief from all humans (That's not my God), often because some other goal has a higher priority.

Probably the most popular objection to the argument from non-belief is that if God caused everyone to believe, he would be interfering with their free will.

"God maintains a delicate balance between keeping his existence sufficiently evident so people will know He's there and yet hiding His presence enough so that people who want to choose to ignore Him can do it. This way, their choice of destiny is really free."

"God wants all men to love Him, without compulsion or coercion. God could force men to love Him if that was His will, but of course, this is not real love.[7]"

Giving a person some evidence, or making them aware of something or someone's existence, is not an interference with their free will. God could appear and demonstrate his existence but people would still have a choice whether to worship him (Satan, who presumably knows God exists, demonstrates this choice is possible).[2]

Traditional scriptures show God frequently giving people (and even Satan, who nevertheless still rejects him) overwhelming evidence of his existence through miracles, and evidently this does not interfere with their free will — or, at least, God as portrayed in these texts does not value free will highly. Also, the free will objection seems to imply that God wants people to believe in him without sufficient evidence; however, there appears to be no good reason for him to want this.

This argument is incompatible with some other apologetics, such as atheists know there is a God, argument from scriptural miracles.

Along similar lines is the soul-making theodicy: God cares about our spiritual development and giving direct evidence would undermine that goal. However, it seems unlikely this goal would preempt God supposed desire to have a loving relationship with everyone. It is hard to see how keeping most people in the dark about God's existence, many for their entire lives, is really in peoples' best interests.

"Whenever we become a Christian, we come into the faith with what I call pre-school faith. And it's God's responsibility to graduate us to high-school faith. And the only way he can do this is by putting us in situations where we need to trust him. And the reason why he does this is he knows that he may have something for you to do later on down the line that requires high-school faith and if you don't have that kind of faith you won't be successful in carrying out the assignment he has for you [...] [8]"

Also, there is no clear reason why God can't create people in the desired end state without having to go through the process of development.

Apologists argue that since faith is virtuous, God does not provide clear evidence because it would make faith unnecessary.

"If God so desired, He could simply appear and prove to the whole world that He exists. But if He did that, there would be no need for faith.[9]"

This is refuted by many instances in scripture in which evidence is available.

God does not intend for salvation for everyone[edit]

Many Calvinists have claimed that the argument from non-belief is inapplicable to Calvinism, because Calvinism holds that God does not want all persons to be saved. This, however, requires an implausible understanding of Biblical passages such as 1 Timothy 2:4

Let X be "having all humans to believe God exists before they die". Not only is there no good reason for God to refrain from doing X, but it is also irrational for God- especially the Christian God- not to do X. Relationships are something within human understanding. The Christian God supposedly cares terribly about matters of belief and interaction with humans, as depicted in the bible and other holy books; hence if such a God deeply desires to do X and attempts to do X but fails (as attempting to reveal a religion to all humanity and convince everyone about its validity), then this omnipotent and omniscient being does not exist.

God would not want a relationship with humans but make them incapable of understanding that relationship.[2]

Along similar lines, there is the claim of an unknown reason that causes God to delay communication:

"God’s existence may not be evident to someone at certain stages of his life but may become evident when and through what means God chooses.[6]"

Drange's formulation of the argument (see above) is also a good reply to these theodicies.

You did not sincerely seek for God[edit]

Apologists claim that one simply has to seek god with a sincere heart to find him. When this fails, they blame the non-believer for not truly seeking God.

"An atheist might say, "I can't find God anywhere!" But an atheist cannot find God for the same reason that a thief cannot find a policeman. He is not truly interested in finding Him. Once the atheist is an agnostic there is a basis for communication.[10]"

"He imagines himself to be sincere and earnest in seeking God, when in truth he may not be. There is a large literature on the incredible human capacity for rationalization and self-deception that is relevant here.[6]"

"They can’t find God because first of all, they aren’t looking; and second they want to avoid him.[11]"

The apologist is claiming knowledge of the non-believers mental state that they can't possibly know (similar to the claim that you just want to sin).

"[...]one would have to believe that every non-Christian is lying, either about God's existence being evident or about being sincere.[6]"

One premise may be rejected by claiming God obviously exists. This claim is not accepted by non-believers.

"By love, God has revealed himself and given himself to man. He has thus provided the definitive, superabundant answer to the questions that man asks himself about the meaning and purpose of his life."

— Catechism of the Catholic Church, 68

"For since the creation of the world his invisible attributes are clearly seen, being understood by the things that are made, even his eternal power and Godhead, so that they are without excuse"

These are arguments from authority. Skeptics require these sources to be established as reliable before they can be relied upon.

God wants to reveal himself in a new way[edit]

"Whenever we come into the faith, you know him as savior. But then you get sick and he heals you, and you him as savior and healer.[8]"

That has nothing to do with God seemingly being absent, particularly for those outside Christianity. In any case, God does not need to disappear completely in order to help out in various ways.

One can avoid the free will defense by reformulating the argument as follows (P=Premise, C=Conclusion):

P1. If God existed, he would want to ensure a situation where a person employing any reasonable epistemology, would be able to believe that he existed and to know at least some of his characteristics. Because of God's omnipotence, this would mean that such a situation would come about.

C1. From P2-P4, methodological naturalism is a reasonable epistemology.

C2. From P5 and C1, there exists a reasonable epistemology within which God's characteristics cannot be known.