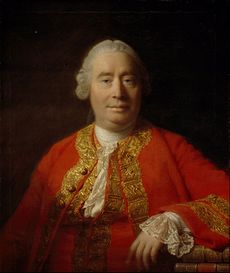 David Hume (1711–1776) was a noted historian and essayist, but is best known as one of the most important philosophers ever to write in English. The last of the great triumvirate of "British empiricists", he is widely regarded by fans and critics alike as an influential skeptic and atheist.

It is difficult to determine Hume's personal religious views and this ambiguity enabled him to write with more freedom.

"If we ask whether Hume believed in God, the answer is 'no, but'. He did not believe in the God of standard theism, or in any variation thereon in limited theism, but he did not rule out all concepts of deity, and neither was he non-committal on the subject."

One of his influential ethical concepts is the Is–ought problem: morally prescriptive conclusions cannot be derived from any number of purely descriptive premises.

Of Miracles examines what testimony would be necessary to establish the occurrence of a miracle.

Dialogues Concerning Natural Religion examines some of the common apologist and counter apologist arguments, particularly the Design Argument and the Problem of evil. The book argues for a skeptical approach to theology and against the validity of evidence-based religion. The book was published after Hume's death because he was "desirous to live quietly, and keep remote from all Clamour".

Hume claimed there is a separation between a priori relations of ideas (analytic propositions e.g. mathematics, logic) and a posteriori matters of fact (synthetic propositions). Hume rejected any statements which do not fit this schema as meaningless; this includes any religious "knowledge" that cannot be examined and verified by experience.

Apologists argue that Hume's fork is self refuting:

"The principle of empirical verifiability states that there are only two kinds of meaningful propositions: 1) those that are true by definition and 2) those that are empirically verifiable. Since the principle of empirical verifiability itself is neither true by definition nor empirically verifiable, it cannot be meaningful. [1]"

However, there is a good case to be made for the principle of empirical verifiability based on their definition of "true", which is "that which reflects reality". And the only way we can get knowledge of reality is by perception. By definition, the principle follows as a necessary result of these axioms.

"A few pages ago, Geisler and Turek were all about the idea that propositions are either true or false. And “true” is defined — by them — as being that which accurately reflects reality. And how do we determine what reality is? We perceive it. Evidence acquired through the perception of reality — through observation or experience — is empirical evidence. Therefore, following Geisler and Turek’s own reasoning, the principle of empirical verifiability must be true by definition, because any proposition that is not true by definition can only be determined to be true or false by judging whether or not it is consistent with reality.[2]"