Many Christians throughout history have believed in, and still believe in, the existence of evil spirits. This doctrine occurs across Orthodox Christianity, Catholism and Protestantism. They are mentioned many times in the Bible. Evil spirits are thought to enter a person and cause certain negative behaviors or diseases. In other cases, evil spirits can persecute or oppress a person. Certain holy people are believed to be able to remove evil spirits from a person; this process is sometimes referred to as exorcism.

For more information, see the Skeptic's Annotated Bible article:
Who can cast out devils in the name of Jesus?

For more information, see the Skeptic's Annotated Bible article:
Where did the devils ask not to go?

For more information, see the Skeptic's Annotated Bible article:
How many men were possessed with devils? 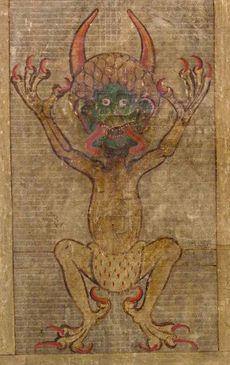 Satan as depicted in a 13th century Bible, although is said to take many forms.

Evil spirits are mentioned though out the Old and New Testaments. [1] Evil spirits can cause dumbness Mark 9:17-29

Mark describes a man that was possessed by a demon called Legion and he could not be restrained because Legion gave him strength to break chains. Day and night, he would cry out and cut himself with stones. Jesus cast out Legion into a nearby heard of swine, unnecessarily causing their deaths. Mark 5:2-13

In 2008 a study, using data from the 2005 Baylor Religion Survey, revealed that 47.7% of Americans believed in demons in absolute terms; 57.8% of the population said the same of Satan and 55.6% of Hell. In comparison only 11.5% decidedly denied the existence of demons. The number of absolute disbelief is even lower for Satan (9.5%) as well as for Hell (9.2%).

There is some debate as to if a true Christian can be inhabited by an evil spirit.

The origin of evil spirits is not explicitely discussed in the Bible. Some Christians believe they are fallen angels [2], or disembodied spirits from the descendent of angels and human women Genesis 6:1-2

Why God created such things, or allows their continued existence, has not been clearly explained. Some Christians believe God granted angels free will, so some act improperly. [3] [4]

Evil spirits are less common than in Biblical times[edit]

Evil spirits do not exist[edit]

The apparent non-existence of evil spirits is an argument against a literal reading of the Bible.